Having a very long think

When Big Media Aren’t the Biggest

It has often been said to me that digital communications is such a rapidly changing field that understanding phenomena in this area might be difficult, or that my conclusions might be out of date by the time they are reached. This is certainly a real and challenging prospect. However, it frightens me less than the prospect that my work might be undermined and influenced to the same extent by even less predictable circumstances – namely those of politics.

Nine months into my research, Australia will have a Federal election. It seems likely that the Liberal-National Coalition led by Tony Abbott will win that election. The digital economy policies developed under Labor by the Department of Broadband, Communications and the Digital Economy (DBCDE) include significant provisions for local governments to rollout various ‘e-‘ services. Of course, Labor is all about ‘encouraging’ local governments along this path, but there is a short ride in the real world between encouraging and pushing. On the other hand, the Coalition may take a more ‘liberal’ approach to digital local government, and cut-off the attendant funding.

I base this assessment on a few factors. Abbott’s government is likely to be much more austere, with figures such as communications spokesperson Malcolm Turnbull calling for a “cheaper” National Broadband Network (NBN) and Abbott himself expressing reservations about the costs of the Gonski education reforms and the National Disability Insurance Scheme. Further, the Coalition is generally more open to self-determination by local and state governments, especially when the largest states are Coalition governed, and it is the states who hold jurisdiction over local governments. (Interestingly, there is also a referendum in September on that very point.) This means, in my opinion, that local governments are less likely to have the resources to adopt new digital communications tools and practices. I have sought some clarification from Turnbull on this topic, but as yet I have had no response.

It is one thing to be dealing with an inherently unstable medium; it is another entirely to be planning for unstable politicians. That is why politics makes me less certain about the prospects for my research than even the fast-moving nature of digital communications itself. 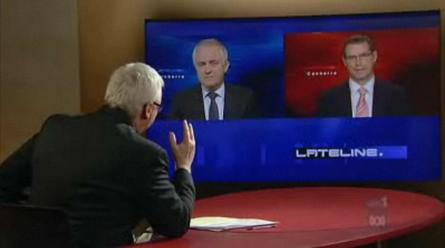 Tony Jones faces off with Malcolm Turnbull and Stephen Conroy